“If the words “life, liberty and the pursuit of happiness” don’t include the right to experiment with your own consciousness, then the Declaration of Independence isn’t worth the hemp it was written on.”
– Terence McKenna

This time exactly one year ago I was attending the High Times Cannabis Cup in Denver, Colorado. I didn’t view it then as a ‘get high free-for-all’ but rather as a ‘looking for new meds adventure.’  Believe it or not, there is a difference in marijuana and how it affects the body based on what type of condition that’s being treated.  Yes, I did happen to run into Snoop Dogg at one of the dispensaries.  And yes it was awesome!  This year, however, since our little boy is on the horizon, my wife advised that I stay close to home.  Notice I said my wife advised me.  So, I…..took her advice.

Anyway, I think one of the common misconceptions about those of us who use cannabis whether as a medicine or recreationally are seen as the stereotypical ‘stoners’ like Cheech and Chong.  I also think that most people’s perceptions are that most consumption is through smoking out of a pipe or a bong (water pipe).  I’m not going to attempt to go through all the specifics about the different strains because there are more than I can count.  I will say that this medicine in made in the bud, edible, wax, shatter, tincture, salve and pill forms.

Why do I seem to harp so much about this medication?  It is also helping me to survive the wounds from the past.  The addiction community, depending on the area of the country, are usually not in favor of any ‘mood altering’ substances.  Think about this…..ever been around your spouse or yourself in the mornings before you’ve had your coffee?  I’m just sayin’.  Yep, very mood altering.  Now, I’m not making light of the concerns.  That was just something I thought of that I personally found amusing. 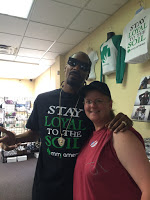 In earlier blog posts, I’ve stated my concerns about being a former practicing drug addict and being suggested to use cannabis as a medication.  Not everyone’s situation is the same and I get that.  I can say that my wife and I felt like we were in a ‘do or die’ situation.  Is it mood altering for me?  My wife would tell you, “Thank God it is!”  With everything that goes on in my brain on a daily basis, vaporizing some medical grade cannabis can actually bring me back down to reality and into a much calmer state.

Now, some of the arguments I’ve heard against medical cannabis is, “not everyone is going to have a legitimate medical condition.”  You know what? That’s true.  How many prescription drug addicts have legitimate conditions that require the AMOUNT of medication that they’re taking?  I would much rather all the prescription pill drug addicts trade all their pills in  for a designated amount of weed each month and see how far down the death rate goes and the overdose rate goes.  All of those amounts will correlate to the amount of Cheetos and Girl Scout Cookie stock rising to an all time astronomical high.

These are very ‘tongue n’ cheek’ views but getting heated usually doesn’t help much.  I just know that I was very closed minded and had very tunnel vision on addiction and how it MUST be treated before moving to New Mexico from the South.  My former clients, additional recovery services and my own struggles with mental illness have led me to a less rigid view on this drug.  I still maintain a somewhat rigid view on just about any other drug.  The benefits of marijuana are seen and felt everyday in the LIVES of the LANDRUM-ARNOLD FAMILY.  If this medication can bring me this much mental and physical relief from PTSD and other complications associated with a lifetime of abuse.  Surely, our soldiers should be handed an ounce and a card when they step back on to U.S. soil from having to kill people and see their buddies killed just so I can be free.

I guess I should get you a little bit of information about how the term “420” became the big “stoner’s holiday.”  So, here’s a little explanation from good ole Wikipedia which is NOT a scholarly source, I might add…..

A group of people in San Rafael, California, calling themselves the Waldos because “their chosen hang-out spot was a wall outside the school”, used the term in connection with a fall 1971 plan to search for an abandoned cannabis crop that they had learned about. The Waldos designated the Louis Pasteur statue on the grounds of San Rafael High School as their meeting place, and 4:20 p.m. as their meeting time. The Waldos referred to this plan with the phrase “4:20 Louis”. Multiple failed attempts to find the crop eventually shortened their phrase to simply “4:20”, which ultimately evolved into a codeword that the teens used to mean marijuana-smoking in general. Mike Edison says that Steven Hager of High Times was responsible for taking the story about the Waldos to “mind-boggling, cult like extremes” and “suppressing” all other stories about the origin of the term.

Hager wrote “Stoner Smart or Stoner Stupid?” in which he called for 4:20 p.m. to be the socially accepted hour of the day to consume cannabis.  He attributes the early spread of the phrase to Grateful Dead followers, who were also linked to the city of San Rafael.

Now wasn’t that just the most profound information you’ve ever read?  Sounds like a true stoner story for sure.  Some say that ‘street weed’ and ‘medical grade’ are the same. They are NOT.  Medical grade is governed so closely as to what they can use on the plants to make sure they’re safe for the public.  Street weed, well…..is not governed and is often sprayed with chemicals which can cause paranoia, psychosis, etc. depending on the chemicals used.

The medication I use today has three side effects:  eat, laugh, and sleep. Yep, that’s about it.  I still have other conditions that require additional medications.  Let me remind you that marijuana is a medication not a ‘cure all.’ Therefore, there are some conditions that still are unknown or cannot be treated with marijuana that is known at this time.   One thing I do know, for ME, all of my psych meds are rolled up into one vaporizer.

420 the ‘stoner’s holiday’ is written a few different ways such as:  4/20, 420, 4:20.  Most see this just as another day for people to get high.  But for those of us who depend on this “weed”, “flower”, “medication”, “bud”, “ganja”, “herb” or whatever you want to call it to simply have a quality of life.  We see this as a day to celebrate this medication that helps make life worth living again.