She Will Always Be Her Daddy’s Little Girl

“He sweeps her hair back from her ears; he swings her above his head. He says she is his émerveillement. He says he will never leave her, not in a million years.”
― Anthony Doerr, All the Light We Cannot See

Call this a typical Father’s Day post, but you can’t call him a ‘typical’ father.  This man that I’m going to talk about is a man that he and his wife were and have been and continue to be diligent servants of their Heavenly Father.  As a result, in December of 1975, after a grueling 8 years of red tape and frequent hoop jumping their dreams of being parents and for him being a father came true.

This was a job that he rejoiced in and fully embraced through both tears and laughter.  Even though some of my childhood memories evade me these days, I can still smile at some of the memories I have of my father.  As a small child, he would often become a regular jumping and punching bag in exchange for instantaneous tickle torture moments.  There were also those times when he would take me on Saturday mornings on the lawnmower while he cut the grass only to have to stop to put his soon sleeping daughter in the bed.

During my younger and developing ball playing days, he would almost daily throw the ball with me in the front yard.  I must admit that before I developed control in my throwing he would frequently travel to the jungles of the azalea bushes to retrieve a wildly thrown ball.  He never complained but I think he secretly celebrated each time he didn’t accidentally stumble upon a water moccasin.  Yep, he feared those dreaded bushes.

When it came to basketball, well, he tried is about all I can say.  I think he mainly just wanted to make sure that there were no unneeded dents left in the vehicles.  The job of playing basketball was turned over to the neighborhood kids. Really?  You didn’t think I noticed?

When I hit my teen years, he prayed, like my mom, without ceasing.  My mother told me that once I became a teenager that something took over my mind and body that was not of God.  I cannot tell a lie.  If I asked my father that now he would very calmly say, “Why yes, sis, that might’ve been correct.”  Now you have to imagine that my father gets about as excited as a basset hound. And most of the time you need a cattle prod to check to make sure he’s still breathing.  Nope, it’s not a deformity, that I know of, it’s genetic.  He didn’t ever say a whole lot when I was younger. Now, he just claims that with 3 females in the house, he couldn’t get a word in.  All 3 of us were just hormonal as hell is the way I still see it. 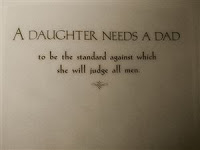 If there was a downfall, I would have to say that I didn’t learn to fix ANYTHING.  I know what a hammer is. Isn’t that good enough?  Granted, I was always playing with the neighborhood kids, but he was always fixin’ things or doing projects for or with momma. These days I just hope my wife can YouTube a video of how to do something and fix things.  I’m just not one to be able to fix things.  My job is to tell you when something doesn’t work.  And to provide motivation through entertainment.

He has seen me take some extremely difficult roads in life and has had to sit back and watch with tears in his eyes as his daughters were having to learn some heartbreaking lessons.  There have only been a handful of times that I’ve see him cry.  But, the tears I haven’t seen, I’m sure number in the millions and likewise the prayers.  He has watched me waste away from addiction and abuse and is currently seeing the severity of the effects of mental illness.  He also sees me continuing to battle my abusers through memories that can be paralyzing. He watches as I continue to move forward even if that is a crawl. With both he and my mom, there’s never a shortage of encouragement.

I can personally count on one hand the number of men that I consider “safe.” My #1 started with my father. I have never feared him in any way other than maybe another lecture on the power of positive thinking. He never drank, smoked, cussed, hollered, screamed or anything remotely aggressive in our house.  Heck, a basset hound doesn’t have the energy to do that. He taught me what love, honor and respect are all about. So, when I encountered some of my predators, my brain was seeing behavior that I couldn’t understand.  And it was at that time, that he held and comforted me as I cried about some of the evils of people and the world.

Everything that he has done for me cannot be conveyed in a post nor can the true emotions.  Even through just the little bit that I shared you can tell that he’s not my father.  He’s my DADDY!