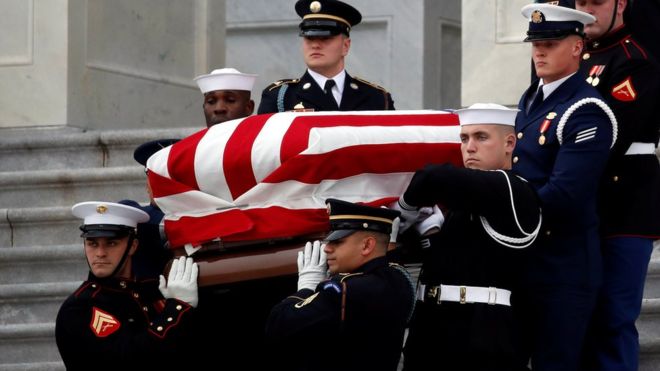 “We know what works.  Freedom works.  We know

With all the national coverage about the passing of our nation’s 41st, Former President George H. W. Bush, I was quickly reminded somewhere in my psyche that history was again happening and I have the pleasure of witnessing it.  When I was a young child (preteen) I cared mainly about playing.  I didn’t care about the world or its politics.  My job was to play hard and make messes.  The magnitude of the earth was just too big to comprehend or imagine.

I do, however, remember something very specific about being in the 4th grade in the year 1986.  It was the day all of our classes were combined and it was going to be a really exciting day. We would watch on TV a space shuttle take off and a teacher was one of the astronauts.  To me and I’m sure others, the really big deal was that we were not having to do school work at the moment.  We all got excited doing the 10 second countdown.  And then…..LIFTOFF!!!!!  We heard and saw the roaring power of that big shuttle shake with an enormous level of power lift off and  barrel towards outer space.

On the TV screen it looked like a firework had just exploded.  The teachers were gasping in fear and astonishment at what they had just seen.  I hadn’t quite understood what had happened myself.  I look around the room at the kids and they were just whispering to other students around them.  I look at the teachers and their eyes were full of tears and rolling down their cheeks.  I thought to myself…”Am I suppose to be crying too?”  “What just happened?” The name of the shuttle would be called….the Space Shuttle Challenger.  It exploded 73 seconds into its flight killing all 7 crew members which included a teacher by the name of Crista Macauliffe. The breakdown of the shuttle began after a joint in its right solid rocket booster (SRB) failed at liftoff.  I obviously didn’t realize the importance of what I was seeing, at that very moment, but it would later be called history.

Skip ahead to my 8th grade year (1988-1989) and we were once again allowed to watch history happen.  The first well known computer virus was called the 1988 Internet worm.  The World Wide Web was just being discussed and a plausible idea as another form of communication.  Ronald Regan had been the President. George H.W. Bush would fall in line as the 41st President of the United States of American the following year. And my basketball hero named Pete “The Pistol” Maravich would die playing a pickup game of a massive heart attack forever leaving a void in the sport of basketball.

I began to learn that this world was big and it seemed not to revolve around me despite my best efforts. Politics were still too complicated to fully understand.  And when the president’s address to the nation came on I still wanted to change the channel.  Life was simply but becoming more and more complicated the older I got.

As an adult now, I look back on historical events that have happened or are happening and I try to understand them and how they relate to other parts of history, present and future.  Yesterday, I was in a doctor’s office watching some of the news about the passing of former President George H.W. Bush.  I watch as former presidents and their wives filed into the National Cathedral in Washington, D.C.  where our nation’s 41st elected President and his service to our nation would be honored.

Former President Jimmy Carter was looking very 94ish in age.  He looked like he had one foot in the grave and another on a banana peel.  But credit to him for attending this service. Once the Presidential pumpkin and his wife got seated the service began shortly afterwards. 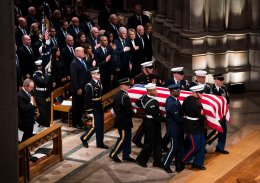 I am again reminded how as I sit and have my eyes glued to the TV in the waiting room that I’m also, once again, watching history happen.  Without thinking to a room  with a few people and all eyes paying attention to the screen I say, “You know….I really hope that the teachers in the schools are allowing the kids to watch this service even for a few minutes. I know how much that means to me now as an adult to know that I saw history happening at school and I didn’t just hear about it.  I don’t know the reasons  why we were allowed to watch some of these things in school.  But I’m glad we did because on those days I felt like I was getting an education in subjects they didn’t teach at school. This an many other reasons are why I continue to call our free nation….AMERICA THE BEAUTIFUL.

“Freedom is never more than one generation away from extinction.  We didn’t pass it to our children in the bloodstream.  It must be fought for, protected, and handed on for them to do the same, or one day we will spend our sunset years telling our children and our children’s children what it was once like in the United States where me were free.”