“Millions of lives were changed in a day by a cruel and wasteful storm.”
—–President George Bush

This is a topic that to this day a difficult topic to talk about.  June 1st is the beginning of hurricane season which will run until November 1st. I was in Mississippi at the time about 1 hour north of Gulfport in Hattiesburg, MS. Make no mistake that she left her mark on this area as well. I still have a lot of anxiety when a storm comes around which is often. Katrina was something that this area couldn’t imagine possible after Hurricane Camille in 1969 and Hurricane Frederick in 1979. We had “minor” hurricanes in other years. But after hearing stories from my parents and grandmother I wanted to see one for myself. All I can say is, “Be careful what you ask for and want.” I can say that I have some PTSD from the trauma that occurred from this storm.

This image became known as, “The Stairs to Nowhere. “August 29th, 2005 will never be forgotten. It’s been 15 years and just talking about this hurricane and tears will come to my eyes. I will never forget the uninvited guests known as love bugs that covered our vehicles and houses. The mosquitoes that were the size of house cats. The heat inside the houses was so hot that sleeping outside in a truck bed was the only way to get away from some of the heat. But the mosquitos were so bad that you also had to keep in mind that West Niles virus was also very possible. The price gauging from the companies from out of state to removing trees off people’s houses. Price gauging for gas and the rationing of gas.

We were told to plan for no food and water for 3 days. It was more like 2 weeks in our area. We all ate good for the first couple of days while everyone’s freezers were defrosting. After the defrosting everyone just had rotting meat and nothing to do with it. There was no sewage working either. Talk about nasty…. the manholes were running over with raw sewage and going everywhere. It was so bad that city officials were riding around neighborhoods telling us to use the bathroom in the woods. 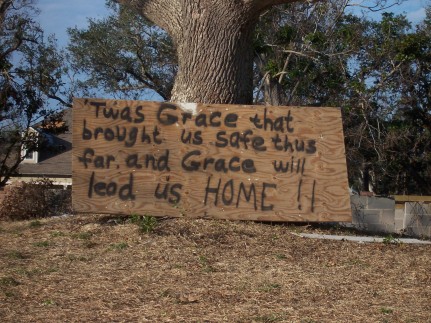 A good friend of mine who was dating my sister at the time helped my dad with a chainsaw cut the tree limbs that were possible to move and put in a pile for the city to pick up. Sadly, he’s one of my friends that passed away a few years later. He was a good guy and I miss him dearly. We would finally get power restored two weeks later. Cell service would not be restored until November because the cell towers in New Orleans were destroyed. I was able to drive down highway 90 which was along the beach to get pictures like the above because I was a current student at William Carey University. The National Guard had control over the street and highways. I was in awe at what I saw. The mausoleum had been opened and the deceased were lying around on the beaches. The bodies of the ones of the mausoleums were also trying to be identified. Entire casinos barges were picked up and moved across the highway. The magnitude of the situation was finally beginning to hit me. This level of destruction I had never seen. I couldn’t identify street because all the signs were ripped away.

This was a funeral home where the first level was destroyed, and bodies were found on the beach. The amount of devastation on the Mississippi gulf coast was never acknowledged because New Orleans got most of the coverage. That was the reason for me and a teacher from William Carey University decided to write the book.
Those were the days where you got to know your neighbors and pull resources together just to get by. This is also about everyone being on the same economic level because there’s were no working atm machines and no banks open. I can remember that Sonic made hamburgers for the entire city of Petal, MS to keep the meat from going bad. Unfortunately, it was very difficult to find a place to keep certain medications cold for both children and adults. There were just not a lot of formula and water for babies and no way to keep medications like insulin to keep cool for the adults. There were thousands of people that were helpless during those days. We didn’t finally get cell phone service back until sometime in November because cell towers were destroyed.
We had no way of knowing what was going on in other areas. It was like we were on an isolated island because as a community we were also stuck on survival. The mayors had also called for a curfew in Petal and Hattiesburg and surrounding cities. For those who had generators the issue was fuel. And you also had to be alert for people stealing fuel out of generators, cars and boats through siphoning. There were many tears that were shed in the days after the storm. The storm itself was scary but nothing could compare to the fear and emotional devastation that happened as a result of the storm. Many thoughts of rebuilding, and others moved away forever. No matter what area of the south people lived in the date August 29, 2005 and the vicious Hurricane named Katrina will forever be engrained in people’s memory. And every year when that day comes around, I still shed tears for the tremendous loss that our state of Mississippi and the surrounding states that became our new reality.