The Comedy of Daily Life

“Laugh. Laugh as much as you can. Laugh until you cry. Cry until you laugh. Keep doing it even if people are passing you on the street saying, “I can’t tell if that person is laughing or crying, but either way they seem crazy, let’s walk faster.” Emote. It’s okay. It shows you are thinking and feeling.”
― Ellen DeGeneres, Seriously… I’m Kidding

Lately, my life in Texas could be described as “OMG not again!”  Yep it has been a wild and crazy roller coaster that hasn’t let me down yet. Most days consist of staying in my bedroom in tears over things I can’t control and mistakes I’ve made.  I’m a worrier that will worry for others even when I’m not asked.  And being a parent and living away from my wife and kids is just an added layer of worry.  I think sometimes, “Holy Hell when will we catch a break?” If my life were a song it would be the screams of a cat whose tail is being smashed in a rusted, squeaky gate.  And then out of nowhere the comedy of life presents itself in a way that seems to catch me right before I willingly dive off a cliff.

Recently, I’ve had some comedy that has given me some much needed laughs.  I have been asked many times about where my comedy comes from.  And honestly, I just keep my eyes and ears open and wait for comedy to happen because it inevitably will occur when we least expect it.  I truly think that it has saved my life in many different ways.  So, as I usually do, I will share three times that I’ve gotten good laughs recently.

A couple of weeks ago I was sitting on the back porch watching the local wildlife like I usually do.  I have seen both predator and prey while usually singing or listening to my favorite Pandora stations.  There are squirrels in quantity that appear to be training for the “Limb-to-Limb Olympics” while also working on their dismounts.  I have had interactions with opossums, cats, snakes and the laziest frog I have ever encountered.  Those are other stories that have their own comedy attached to them.

This particular day was about the squirrels climbing fast up a tree and then a sudden stop.  Out of the corner of my eye about 30 feet away I saw a black cat crouched down on the outside of the fence looking into the backyard at the squirrel.  I thought to myself, “This is about the dumbest cat I’ve ever seen.  He’s crouched down and will run into the fence instead of catching and debilitating the prey which seems to be the focus.” I watch for a few minutes and the cat never moves.  So, I think that “cat calling” will definitely get its attention.  I start make sounds that sound like mating tomcats.  The cat still doesn’t move.  By now, I’m thinking that the cat is deaf and if I start walking its way maybe it would see me.  I slowly start walking to the fence and had gone about 10 feet when I realized that the black cat that I had been calling was actually a black trash bag that was caught on the fence and  blowing in the wind.  I couldn’t help laughing so hard that my stomach hurt.  I knew that this incident wouldn’t help me in a sanity hearing. I just imagined trying to plea in court by saying, “Your honor I was accidentally “cat calling” a black trash bag because of my eyesight, I promise!” 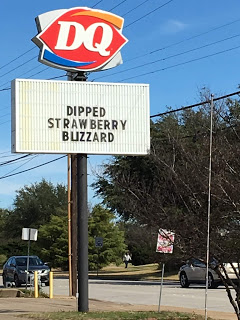 Then a ride around town and I saw this sign knowing what it was meant to say but the letters were pushed too close together.  From a distance it looks like Dairy Queen was adding a new menu item that  was called “Dipped Strawberry Buzzard!”  I obviously knew what it was meant to say but I had to stop and take a picture because I knew that no one would believe that I saw this in small town Texas. I laughed until tears ran down my cheeks.

The 3rd incident involves me going to Target.  I’m constantly trying to go in public in hopes that I will overcome my fears and it never happens.  Anyway, I was there right after the store opened thinking that this was the best time to go since there wouldn’t be many people.  I got that part right.  I keep an eye on everything and everyone with an escape plan close at hand.  However, I got sidetracked by looking at some clothes.  Out of the corner of my eye I see a figure standing right next to me.  I squealed and he jumped.  I was seriously thinking that a serial killer had just attacked me.  Actually, I was never touched but as far as I was concerned I was already bound and gagged.  Me and the gentleman both laughed.  I admitted that I watched entirely too many shows involving murders and profiling serial killers like Criminal Minds.  But I was pretty sure that I could solve a murder for the FBI on my own.  I also told him that I got so scared because I had just been reviewing cases and the statistics were high for serial killers that were found shopping in Target. Seriously, how was I going to justify that one. And that was a good laugh as well.

Life is difficult no doubt.  For me, life is extra difficult and a lot of times its for no other reason than I stay stress over things I can’t control. This tumbleweed from New Mexico has learned to ALWAYS keep my eyes and ears open and looking for possible danger.  In the meantime, I will continue to look and enjoy the comedy that life hands me.  Whether I provide the comedy for someone else or life drops it in my lap, I continue to fight this very difficult life and trying to stay alive. And maybe…just maybe one day I’ll begin to see my own worth and value that coach and other people have seen in me for many years.