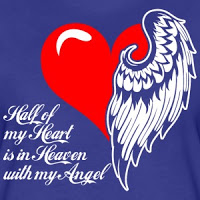 Remembering The Day Half My Heart Got Wings

“The times you lived through, the people you shared those times with — nothing brings it all to life like an old mix tape. It does a better job of storing up memories than actual brain tissue can do. Every mix tape tells a story. Put them together, and they can add up to the story of a life.”
― Rob Sheffield, Love Is a Mix Tape

Recently I was asked to write about how it’s been the last three years since my dear Sarah’s death.   The last month has been one of many struggles personally and internally with ‘coach’ doing her best to bust open the rusty chest.  I usually seem to resist in my own way by attempting to appear much stronger than I actually am.  But then on the hot car ride, more like a convection oven on wheels with no air conditioning in the hot Texas sun,  to whatever residence I’m currently occupying are the awaiting late nights and very lonely tears in whatever solitude I might find.

The one thing I am coming to understand that no matter how much you consciously or unconsciously try to either force progress or resistance, the moment only seems to reveal itself when it’s time.  Mind you this is not a conscious resistance but more one of years of conditioning.  This has often led to much frustration on my part behind a curtain of smiles and laughter.  Nevertheless, I have been wanting and wishing for this much needed painful moment like “Lasterday” as our 6 year-old says.

With the struggles and seemingly endless supply of frustrations of everyday life something either good or bad was bound to happen.  Knowing and subsequently feeling the almost familiar impending doom of something unidentifiably, uncomfortable and scary about to reveal itself, all I could do was wait for whatever it was that was about to happen.  Usually, these feelings come with some form of outwardly aggressive behaviors that lead to some unpleasant event.  However, the moment that I had been wanting and needing the last 3.5 years would finally reveal itself.

I’m not actually sure why this particular time was the right time for this level of grief but nevertheless it would happen.  I’m usually pretty damn good at covering up a lot of painful feelings through my humor but Texas struggles seem to be the site of more and more private tears.  Maybe it’s just part of the process but “coach” has been gentle and we have trusted and allowed her guidance. The total mental exhaustion sometimes doesn’t leave much energy for writing.  And in these times solitude and rest seem to be about the only event in which I can muster any energy.

The struggles of living in an internal world that most can’t comprehend and an outer world that I don’t fit in bares a very heavy weight on both my mind and my heart.  And particularly when I feel like I’m trying to move through life with shoes made of concrete are the times when I want to quickly pick up the phone and call Sarah for her guidance and reassurance.  The reality of the loneliness and emptiness of every such situation the last 3.5 years since her death only brings about tears with little to laugh about when I selfishly need her right then.  And the emptiness seems not able to be filled by anyone but her still at this time.  I have searched but diamonds like that are not easily found.

These past few weeks have brought the feelings of loneliness, abandonment and grief that I buried back in February 2015 and has been recently staring me in the face.  Only when I didn’t avoid the eye contact with my demon did the finality and the pain of her death bring me to my knees in anguish.  My eyes swollen many mornings from several long nights of stinging tears made me look like I had taken a beating from a prized fighter.  It wasn’t until I was reading a former blog post called Passing The Torch that I realized that one possible contributing factor was that her approaching birthday of July 11th was drawing near.  This just seemed to make the grief that much more painful.  I knew that I had been missing her but her birthday just seemed to creep up on me like a dark figure until there was no escape from the shadowed figure.  I didn’t want anyone else’s comfort.  I wanted HER and ONLY HER.  The only way I was able to explain how it felt was like it was the day of her death and my heart was hemorrhaging.  I just hurt all over.

A most well voiced lady one day wrote and spoke about death so eloquently.  Dr. Maya Angelou, describes this feeling perfectly…..

When I Think Of Death

When I think of death, and of late the idea has come with

alarming frequency, I seem at peace with the idea that a day

I can accept the idea of my own demise, but I am unable to

accept the death of anyone else.

country of no return.

Disbelief becomes my close companion, and anger follows in

I answer the heroic question ‘Death, where is thy sting?

‘ with ‘ it is here in my heart and mind and memories.’

Very simply put I have been lost since the day Sarah took her last breath.  I was fortunate to have been in the room when she did that very thing.  She and I both made a promise that we would be in each other’s lives until the very end.  I, honestly, never thought that it would be so soon but I was blessed to have seen and been a part of many different areas and roles of her life.  My life was blessed, as well as, 1000’s of other people mainly other addicts and alcoholics that she chose to plant the initial seed of recovery in some way into their lives.  And to have she and her husband Doug at my undergraduate college graduation several years back was a day that I couldn’t stop smiling.  I look forward to joining her, at some point, once again in an effort to make part of my heart whole again.  For 15 years, I was blessed to have a beautiful, authentic and loving creature touch mine in a way that I will respectfully always call her my “Chosen Mom.”  Because the day she died was the day that half of my heart also got wings.