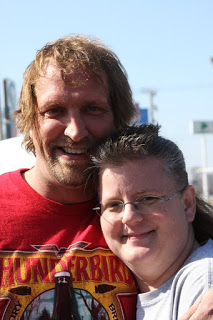 Tears of a Clown

“The role of a clown and a physician are the same – it’s to elevate the possible and to relieve suffering.”

This post is one that I need to write but also dread.  Why?  Because, I’m about to unmask the ‘clown’ that so many have known from both me and my brother, Levi Pierce.  I can’t describe what the last week or so has been like for both me and my little family.  I’ve been from one end of the spectrum of feelings and emotions to the other end.  My body feels like it has been in a war where I got my ass kicked from just the stress and trauma of the situations.  My heart feels like a shredded mess of suicidal rags. By the way, that was just a metaphor. Don’t get all excited about how I word things.  The subjects that I will be discussing are very emotional on every level.

There are very few people that can make me tear up just by hearing their name.  Levi Pierce, Melody Landrum-Arnold and Marshall Landrum-Arnold are three of the people that if I remove the mask and tell you from an emotional level how I feel, you’ll definitely see the tears streaming down my face.  It’s automatic.  I can’t stop it unless I switch back to talking about them from my head instead of my heart.  All three of these people hold very special places in my heart.  I also have a very deep love for all three individuals.

I’ve already told you what an abnormally normal and spiritual connection I have with my brother.  On the morning of August 28, 2014, Marshall and I woke up and were in our morning routine which includes calling Momma Mel.  So, when I called she told me that there was a message from Levi’s wife that he had been in an accident.  I briefly check facebook messenger to see if there was a message from her on my phone.  I didn’t see one from her but there was a message from his brother that said, “It’s about Levi please call.”  And instantly, my heart began to break and my soul began to die.  I had not called yet but I knew it was bad.

With tears streaming down my face as I write this, I was terrified to make that call.  I felt in my body and mind nothing but horror.  I finally picked up the phone and made the dreaded call to his wife.  She said that he had been in a bad motorcycle accident and that the right side of his face was crushed.  There was a possibility that because the eye socket was crushed that he could be blind in that eye.  He had a broken jaw and needed facial reconstruction.  They couldn’t do surgery because his blood pressure and other vitals wouldn’t stabilize. But, for the moment, he was alive.  She and I disconnected the phone call.  I did ask her to please keep me posted.

I call Mel at work and instantly fall apart.  I couldn’t think, breathe or feel anything except the pain similar to what I felt when my Nannie died.  She told me she would make arrangements to come home.  I said, “We’re heading to Arkansas because there was still a chance.”  All I hoped was that somehow he would at least wait for me to arrive to say goodbye since nothing was for sure.  I was utterly devastated already.

My wife and his wife are so understanding and respectful of the relationship that he and I have.  There’s never been even a hint of jealousy from either one.  Even though I’m very much a gay and he is very heterosexual, both of them know how very close of a relationship that we have a very special connection that they also see but can’t explain.  The subject of making the trip was never a question.  That’s just what we were going to do.  I began vomiting and tried to start packing.  I knew that I was walking but I couldn’t feel the ground.  I couldn’t even understand what I should put in the suitcase.  My “core” had just taken a heavy hit.

We end up leaving somewhere around 2 pm that afternoon.  I was smoking weed like a chain smoking cigarette junkie.  I was getting no relief from the physical pain.  And nothing was going to be able to touch my emotions now.  This is the part where Mel could’ve given me arsenic and I would’ve never known.  I was such an emotional mess that she gave me what only God knows really?  From what she’s told me, I slept the entire trip.  We arrived sometime around 3 am in the morning to the motel in Arkansas.  She said that I wanted to go then but she was exhausted too.  And yes, Marshall was with us.  I have no recollection of anything except arriving at the hospital on a mission to see my brother.

When we finally, find the floor where he was, I started making some mental notes about surroundings and people there.  I look off to the left and I recognize a face, it’s his dad after 20+ years.  I see a couple more people who look at me for just busting up in his room.  I see his wife, Charlene Pierce and his brother, Chris Pierce.  Mel was somewhere trailing close behind.  I don’t know if I even said hello before turning and finally making eye contact with him.  He still had not been able to go to surgery because of his vitals.  We both teared up and he says the most precious words that I could barely understand….”Hey, sis.”  I couldn’t help but be able to feel his fear for what he was about to face.  I cried for him, his wife and his family.  There were a lot of people in his room that I didn’t know.  But, I hugged him what I could and just held his hand and cried.  I wasn’t ‘snot crying’ then but I felt it creeping.  The nurse comes in, takes his vitals and says, “You’re vitals have returned to normal. We’ll get you ready for surgery.”  I can laugh about it now, but I think I was like, “What does that mean?”  Normally, I would have the best time with people who asked questions like that.  Today was different.  I couldn’t comprehend anything other than an all over fear that I had never felt.

Now, let me take just a second and let you know that I don’t take any credit for how his vitals were able to almost instantly return to normal.  All I know is that we have such a very powerful and spiritual relationship.  But, this time, I couldn’t get his back like when we were kids.  I just had to be there for he and his family.

At some point, the surgery technicians came to get him.  The staff were letting some of the family give him good luck wishes and kisses.  I took a moment and went outside the room to try and pull it all together.  Yea, that didn’t work.  His brother and I are a few of the last to see him.  He’s shaking all over and told me,  “I’m scared.”  I said, “Me too.”  I told him, “We’ve always shared the load for each other.  Let me take your fear and pain off your shoulders. I love you.”  He simply said, “You better be here when I get back.” That was one thing he need not worry about, I wasn’t going anywhere.  He wanted me to hold his hand and walk him down to surgery.  I kissed him on him forehead and told him that I loved him.  And that day you would’ve seen the “Tears of Two Clowns.”